On the results of the November 8, 2016 elections

I’ve received text messages and calls this morning from many of our brothers and sisters in the IBEW regarding the election outcome both nationally and in the state of Michigan. First and foremost, I would like to thank all of those that exercised their right to vote in this election, and those that put in so much effort. 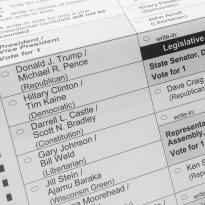 For all of us, the hard work of building our local union and the labor movement continues. While the pundits will have much to say about what these results mean, from my view it looks like the working class has spoken. Surely some segment of the vote was around the issue of race and gender, but overall losing jobs, losing ground on wages, technological changes, and less share of our economic growth has left working people uneasy and concerned about our future. I share those concerns.

Whoever wins elections, our movement remains the same.  We must educate our fellow workers, in all industries, of the value and importance of collective bargaining and standing together. Just as corporations organize themselves, working people must do the same.

Whether you started this morning with your head held high or your head hanging low, we have work to do that doesn’t rely on political parties. Work that we are all committed to that will build the middle class in this country and West Michigan.

So, don’t give up hope and don’t expect a savior.  It is up to us to do that.

This entry was posted on November 9, 2016 by WMALC in Political news and tagged election, ibew, wages.