Remembering the Battle of the Overpass 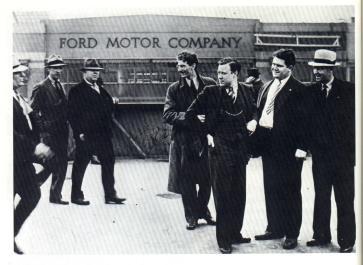 UAW organizers were getting ready to pose for a picture in front of the Ford sign at the Rouge Plant in Dearborn, when Ford’s security team approached them. The security team attacked them moments later. The scene was captured by Detroit News photographer James Kilpatrick.

DEARBORN May 26, 2015– Today marks the 78th anniversary of a pivotal event in Michigan labor history: the Battle of the Overpass.

On May 26, 1937, UAW president Walter Reuther took a group of union organizers to the Ford Rouge Plant in Dearborn to flyer the afternoon shift change. The workers were fighting for a shorter work day and higher wages. Reuther expected around 9,000 men to cross the Miller Road overpass that day.

At around 2pm, a Detroit News photographer that Reuther invited asked the organizers to pose in front of the Ford Motor Company sign for a picture. It was at that time that a group of Ford’s Service Department– a private security force largely made up of ex-cons, professional wrestlers and thugs– approached the organizers and attacked them.

Seven times they raised me off the concrete and slammed me down on it. They pinned my arms . . . and I was punched and kicked and dragged by my feet to the stairway, thrown down the first flight of steps, picked up, slammed down on the platform and kicked down the second flight. On the ground they beat and kicked me some more. . .

The News photographer, James R. Kilpatrick, captured much of the action on film. Ford tried to destroy Kilpatrick’s photos, but a few survived and lead to the establishment of the Pulitzer Prize for photography. The photo of organizers being beaten appeared on the front page of newspapers across the country, attracting national sympathy for the organizing workers. 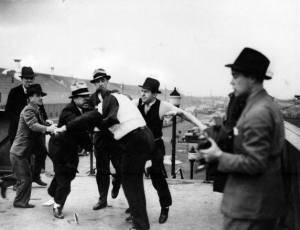 As historian Kevin Boyle says in the film Brothers On The Line: “A symbolic moment where ordinary people who weren’t union members, people living out in Dubuque, Iowa out on the farm, could look at the newspaper and say, ‘Jeez, that’s not right.’ That’s what you want, that one flash where people who aren’t tied to you, suddenly sympathize with your cause.”  (Zinn Education Project)

From a Detroit Free Press story commemorating the 75th anniversary of the Battle of the Overpass:

Joe Crowley, 50, of Canton recounted a story his grandfather frequently told about UAW members intercepting a truck of baseball bats that was supposed to be delivered to Ford’s security forces.

People risked “their lives to fight for simple decent wages,” Crowley said. “It’s something that people often take for granted.”

The UAW eventually won the right to organize the workers at Ford Motor Company. The first contract was signed in 1941.

This entry was posted on May 26, 2015 by WMALC in Michigan labor news and tagged Canton, Dearborn, history, Michigan, organizing, UAW, wages.